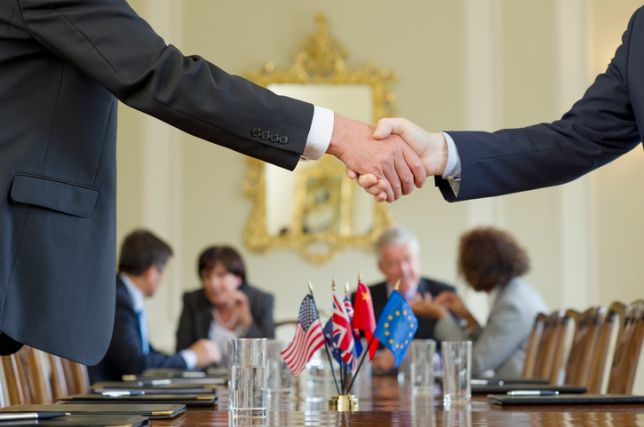 The deadline for a potential deal with the European Union is closing in with crucial dates fast approaching. The European Union (EU) are hosting a summit this month and many political analysts have predicted that a withdrawal agreement could be achieved during these discussions. Time is running out and both sides will need to make concessions if a deal is to be approved. In the US, President Trump imposed 10% tariffs on approximately $200bn-worth of goods from China whilst managing to negotiate a new trade deal with Canada and Mexico titled USMCA.

The UK’s future relationship with the European Union continues to be the pressing subject and the current uncertainty is having political and economic ramifications. Brexit was at the top of the agenda at the Conservative and Labour conference where both parties were determined to persuade the electorate of their competence to lead Brexit negotiations. Jeremy Corbyn set out Labour’s stance on Brexit and said his party would call for a general election if Parliament votes down a deal reached by the Prime Minister and Brussels. He also stated that “all options are on the table”. Keir Starmer, shadow Brexit secretary, even declared that Labour had not ruled out the possibility of another referendum on EU membership. On the other hand, Theresa May is grappling with the divisions within her party whilst attempting to persuade the European Union to accept her ‘Chequers’ proposal. A group of Conservative Brexiteers (totalling approximately 40 MPs) has warned Theresa May that they could potentially vote against the Chequers deal on the premise that it does not, in their opinion, honour the referendum result. However, this could trigger a general election which will cause some concern for any Conservative MPs who are planning to vote against their Prime Minister. The potential of Jeremy Corbyn in Number 10 could force the Conservative party to unite and vote in support of any deal agreed.

Some economic stability should be provided by the news that Mark Carney will remain Bank of England governor until the end of January 2020. Carney has been governor throughout the Brexit negotiations and should help to support a smoother exit from the European Union. The extension will give the government more time to recruit his successor, amid concern that few candidates would want to take on the role during an unpredictable stage in the Brexit process.

Donald Trump upped the ante in his trade war with China by imposing a 10% tariff on approximately $200bn worth of Chinese imports and has promised to increase the rate to 25% next year if a deal cannot be reached with China. This action, to which China has replied with its own round of retaliatory levies with 10% duties on $60bn of American imports, represents a sharp escalation in the commercial confrontation with Beijing. The US has already imposed levies on about $50bn of Chinese imports this year, mainly on steel and aluminium products, but the additional tariffs would sharply increase the economic impact, to the point where duties will cover about half of all Chinese imports. The tariffs are designed by the Trump administration to force Beijing into a deal that would involve shrinking the US trade deficit with China, a promise he made to the US electorate in his presidential campaign.

With the mid-term elections next month, it is possible that the Democrats will take the House with a slim chance of taking the Senate too. It is unlikely that either scenario will majorly jeopardise the positive economic growth outlook but it could hinder President Trump from implementing any key policies for the remaining two years of the current presidential term. However, it is worth noting that Democrats broadly agree with Republican plans for increased infrastructure and defence spending so we expect these to proceed whichever way the elections pan out. The recent strength of the US relative to other regions has emboldened President Donald Trump to stick to his uncompromising approach to trade negotiations. While there is an obvious short-term downside to tariffs, this is far outweighed by the positive impact of the recent tax reforms.

The strength of the US economy has been endorsed by the Federal Reserve’s tightening of monetary policy. The Federal Reserve raised US short-term interest rates for a third time this year and signalled it will forge ahead with plans to tighten policy. In a press conference, Jay Powell, Fed chairman, struck an upbeat tone about US economic performance. “Our economy is strong, growth is running at a healthy clip, unemployment is low, the number of people working is rising steadily, and wages are up,” he said. “Inflation is low and stable. All of these are very good signs.” US economic growth is strong and has continued to beat expectations. US Gross Domestic Product increased at an annualised rate of 4.2% which was slightly improved on the predicted 4.1% growth. This represents the economy’s best performance in four years, with analysts linking this to the tax cuts introduced by President Trump.

Earlier in the year, Italy voted to elect a populist government, namely the Five Star Movement and the Lega Nord which consequently formed a coalition. The first budget announced provoked some concern for the European Union due to the proposal to keep the deficit at 2.4% of gross domestic product for the next three years, busting though EU spending targets and sparking a sell-off in Italian assets. Italy’s economy minister, Giovanni Tria, has now retracted these comments and has insisted his government will reduce the country’s budget deficit from 2020 onwards, in a small concession to Brussels ahead of sending their formal spending plan to the European Commission for approval later this month. This should provide more stability for the third largest economy in the eurozone.

The European Central Bank (ECB) declared an end to its three-year quantitative easing stimulus programme, announcing it will halt the activity credited for reviving a crisis-wracked Eurozone economy. However, interest rates will remain at record lows and the ECB suggested they were unlikely to rise before September 2019 — later than some analysts had previously predicted. The ECB will gradually taper the stimulus programme through the rest of the year, cutting its monthly asset purchases in half to €15bn this month and phase it out entirely by the end of the year.

Asian equities are being affected by Trump’s trade negotiations and this is likely to continue until a concession has been made from either side. There are pockets of value still to be found in the Asian region especially in some of the well established technology companies. In Japan, the central bank made it clear that they would not be joining the world’s other central banks by rolling back crisis-era stimulus policies. Haruhiko Kuroda, the Bank of Japan governor, stated that interest rates would remain at low levels “for an extended period of time”.

The world economy looks set to grow robustly in 2018, but the differences between faster and slower growing countries are becoming more apparent. The most positive news comes from the US, where tax cuts, government spending and business confidence are supporting employment and investment, suggesting solid growth into 2019. This is assisted by lower unemployment in many developed economies, resulting in increased consumer spending. The UK market continues to look uncertain until a deal with the European Union is achieved, resulting in reduced investment flows. Consumer confidence is high across the US

Please note:  The opinions expressed in this update are those of Redwood Business Insurance Services Limited only, as at 4th October 2018, and are subject to change.  The update is for information purposes only.
Source: Financial Times